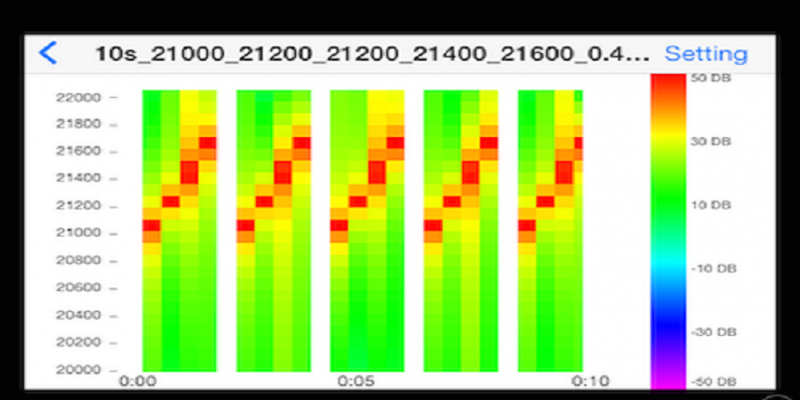 At A.N.Lab, we have recently been developing smartphone applications utilizing ultrasound technology.

The smartphone microphones can record the sounds of frequencies up to 22 kHz (22,000 Hertz), but human can only recognize the sounds up to 20kHz.
That means the sounds in the range from 20kHz to 22kHZ is non-audible to human, but is “audible” to smartphone applications.

By playing ultrasound of certain patterns through a speaker, we can transmit data to the smartphones nearby.

Figure 1. The spectrum of a sample ultrasound data pattern.
(The Y-axis is frequencies, the X-axis is time. Colors represent the sound signal strengths).

Figure 2. The spectrum of ultrasound in Figure 1 recorded through a PC speaker and an iPhone microphone.
There is physical noise, but you can see the data patterns are recognizable.

Given the fact that smartphones can recognize the data transmitted with ultrasound, the following applcations are possible.

A common approach of O2O Marketing is to notify and give rewards to the users coming to the real stores.

iBeacon is a well-known solution for this approach.

(The smartphones would recognize the Bluetooth signals transmitted from iBeacon and display the corresponding rewards to the users).

However, iBeacon has a major drawback: it requires users to enable Bluetooth, while in fact most users usually turn Bluetooth off.

Ultrasound works even when Bluetooth is off.

Assume we place a speaker playing ultrasound in a real store. Whenever a user nearby starts our smartphone app, the app would recognize the ultrasound signals and display the rewards to the user.

Almost any PC speaker could play the 20-22kHz sounds. So it should not be that expensive to place such a speaker in real stores.

Ultrasound works even when the users turn off Bluetooth, 3G, or even Wi-Fi.
However, smartphone apps cannot recognize ultrasound when running in background mode.

The smartphone app can recognize the ultrasound recorded in TV commercials and give the users rewards by watching the commercials.

This is also a method to predict the number of users watching the TV commercials.

ーーーー
At A.N.Lab, we are developing smartphone applications, some of which use ultrasound as the base technology.
If you are interested in the above ideas, please contact us for more details.